In September/October, White Line Services were busy at the Ellesmere Port athletic track carrying out track resurfacing to the whole track. The team began by washing the track to remove any unwanted dirt and grime and prepare the surface ready for the repairs and respraying. 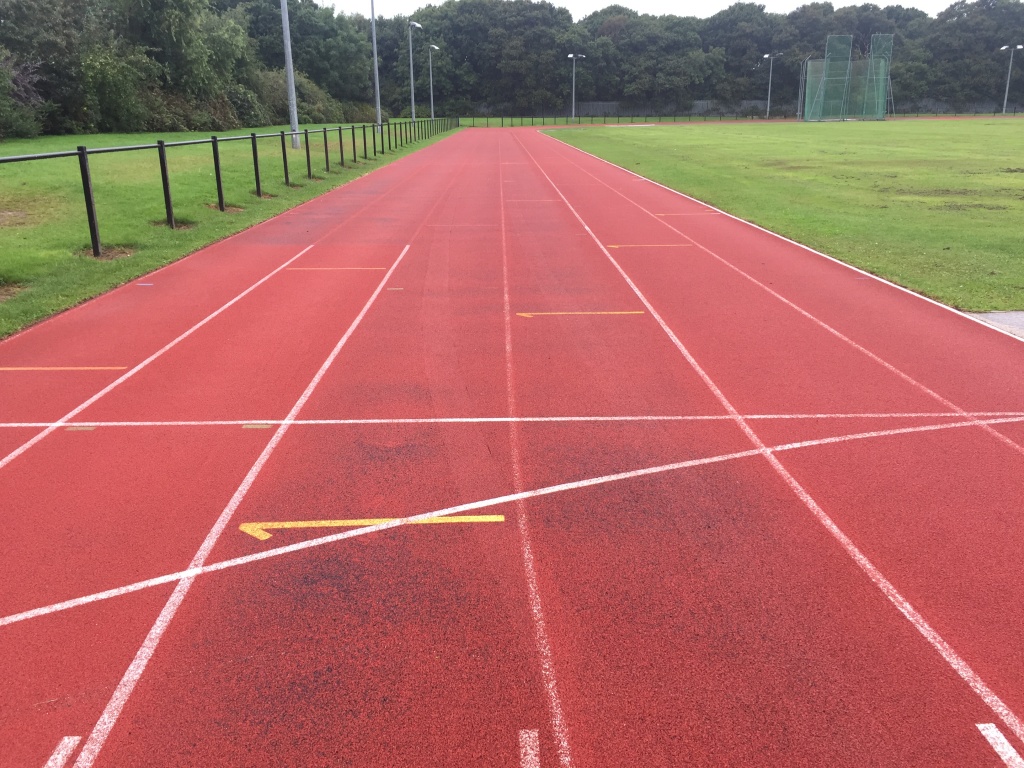 This image was taken after the track was cleaned, as you can see the track has started to wear down to the base mat below.

There were a number of repairs required to the surface including 200 linear metres of cracks and a large area of subsidence where the track surface was removed and the tarmac below repaired.

Two coats of re-textured spray were then applied to the whole track by the team ready for the line marking to begin. Below shows an image during the respraying of the track. 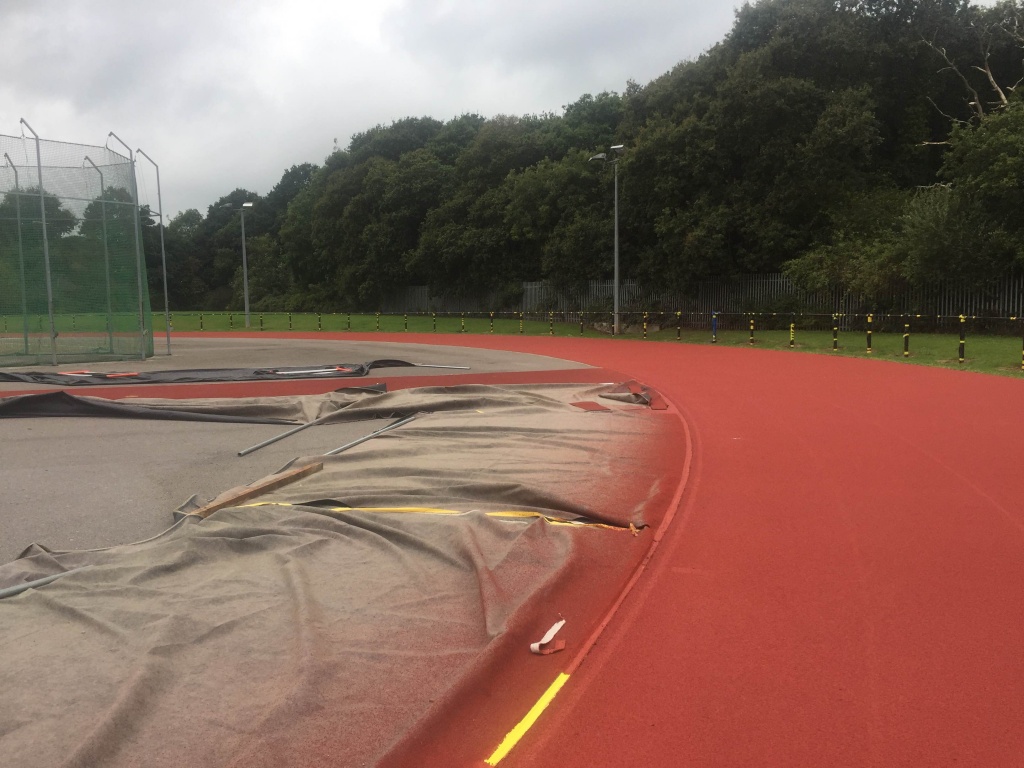 Following the application of re-textured spray, the new lines and events were surveyed and painted onto the track. 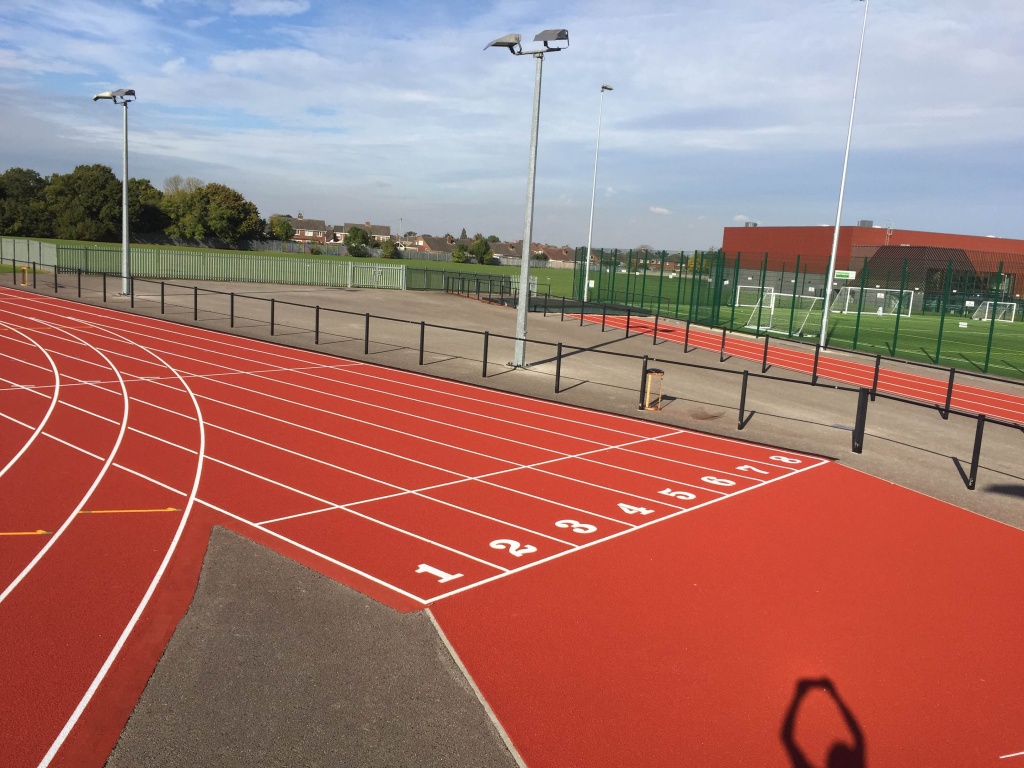 With allowances for some rainy weather and curing time, the work took 4 weeks. Please note, all of the materials used by White Line Services are IAAF certified.

If you would like any more information about getting your track repaired and resurfaced, please call up the office on 01342 851172 for a bespoke quotation. 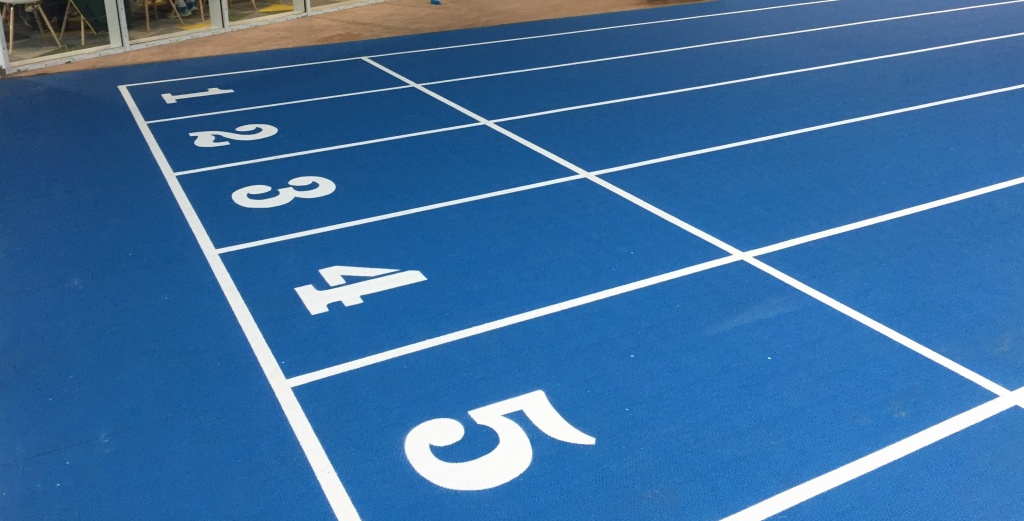 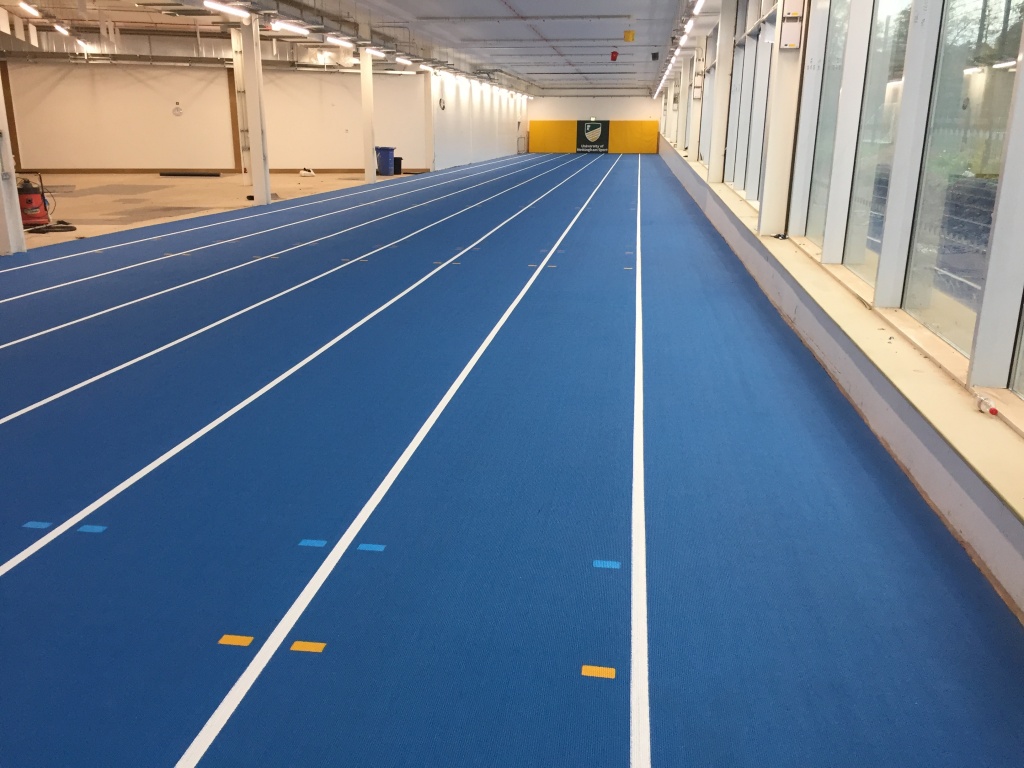 To all the Chelsea fans out there (including one of our WLS workers), we were excited to be asked to survey and paint at the Chelsea ground this week. The Cobham Training Centre is the training ground of Chelsea Football Club located in Cobham, Surrey.

The training club now has a shiney new 2 lane 70 m sprint track that runs parallel to the outdoor pitch and the indoor hall. 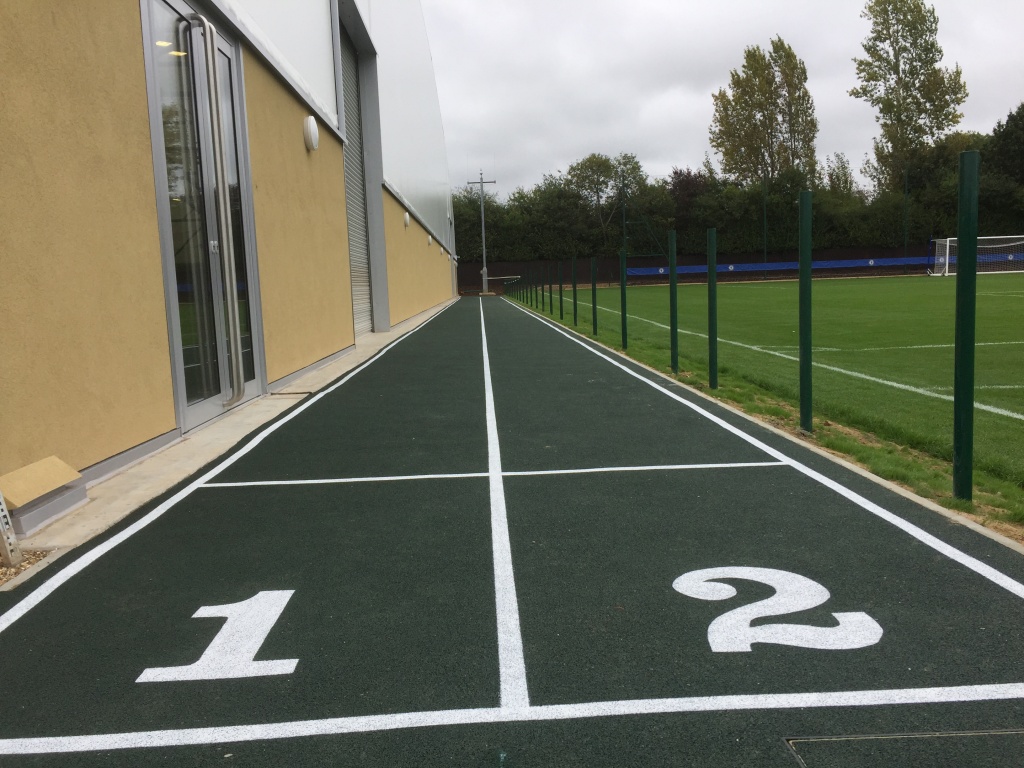 While the men were surveying and painting the sprint track, some of the youngsters from the team were out training on the field. 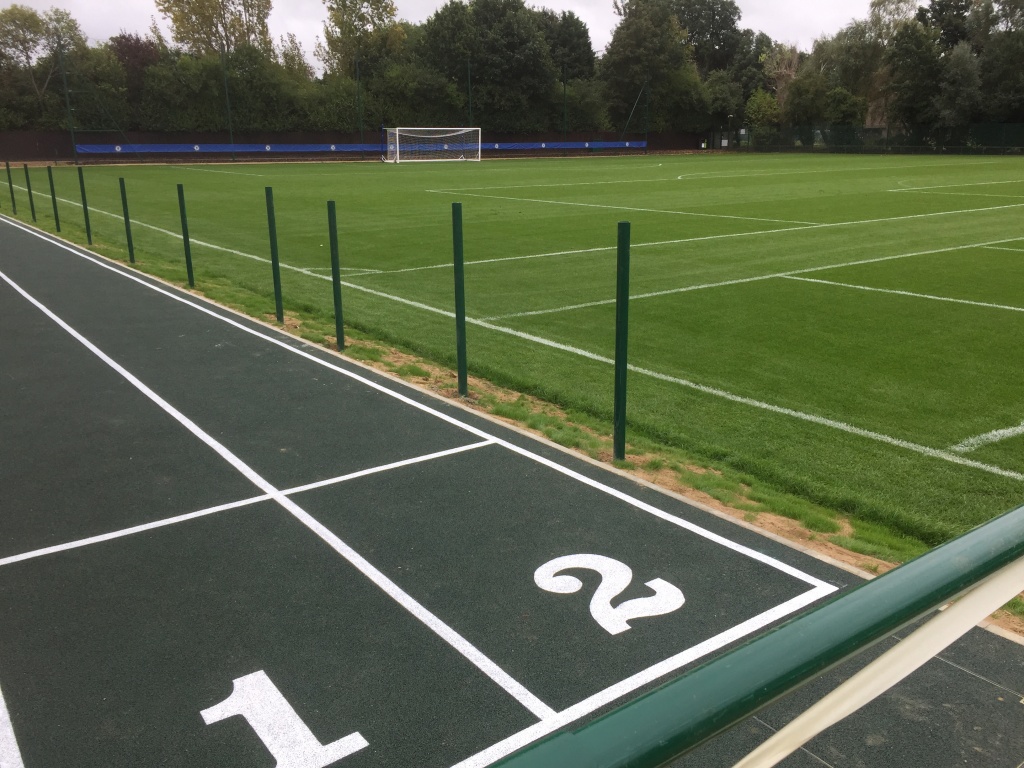 This week, we are working on 2 tracks in Norway. The first is a 200m track near Drammen, Norway. The track is at Veitvet Skole located outside of Oslo, with fitness equipment on the inside of the track. 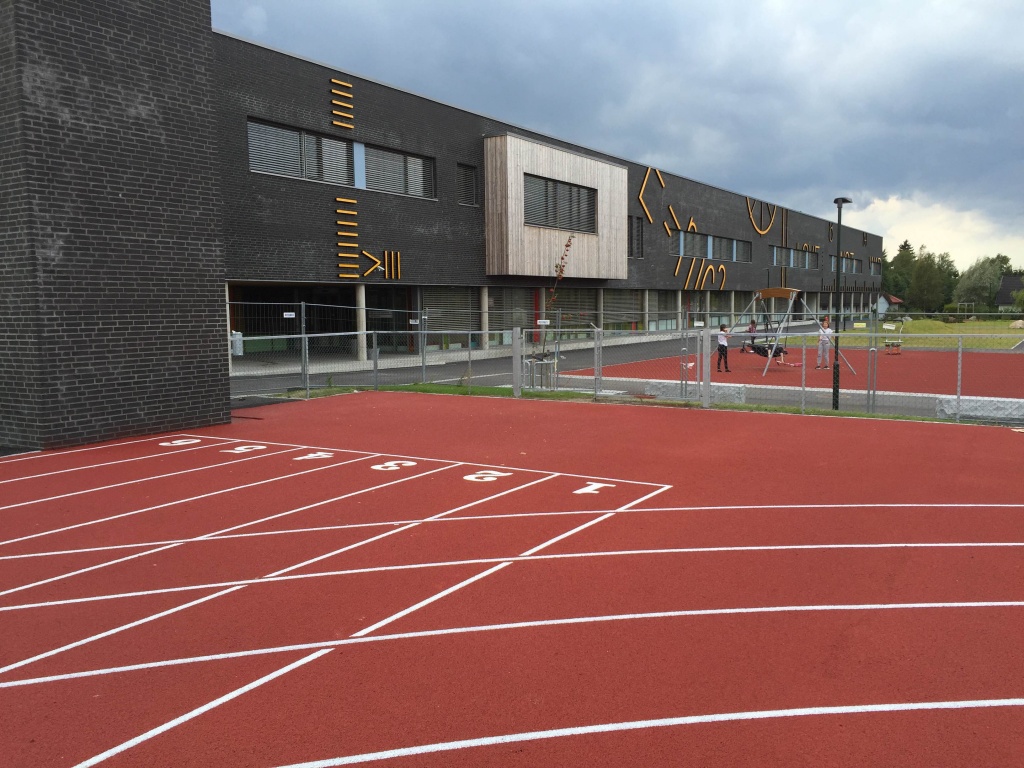 After 3 days, the first track is complete, as you can see in the image below. Here is Visar Jusufi, setting up ready to begin painting. 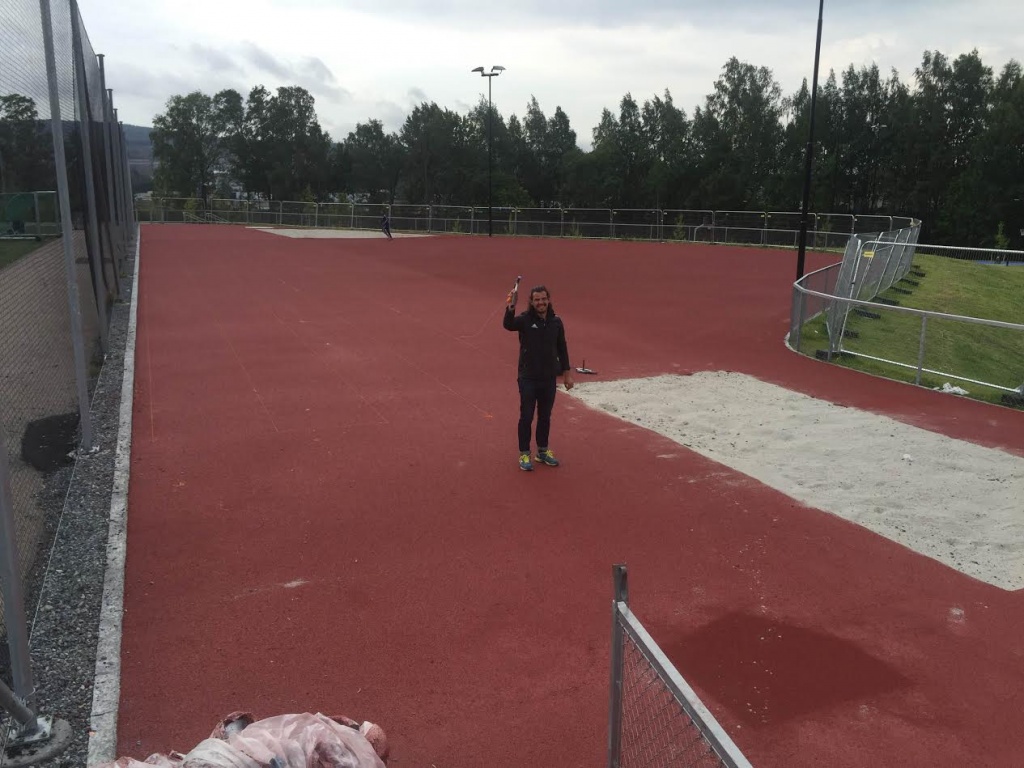 And here is the complete track. 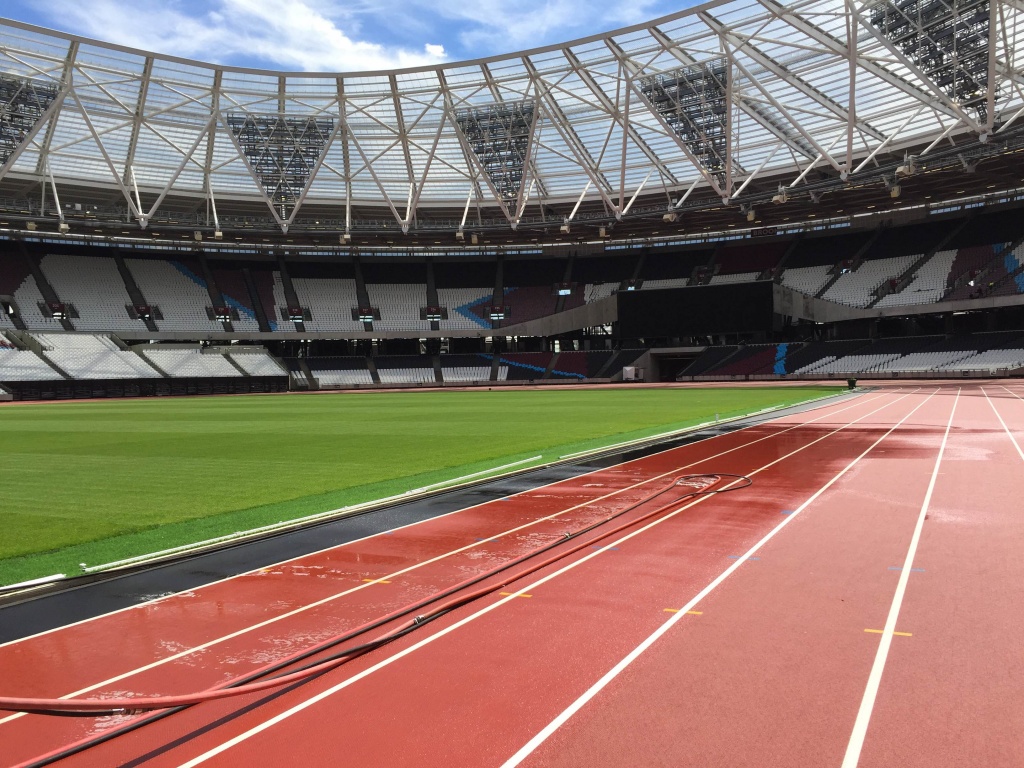 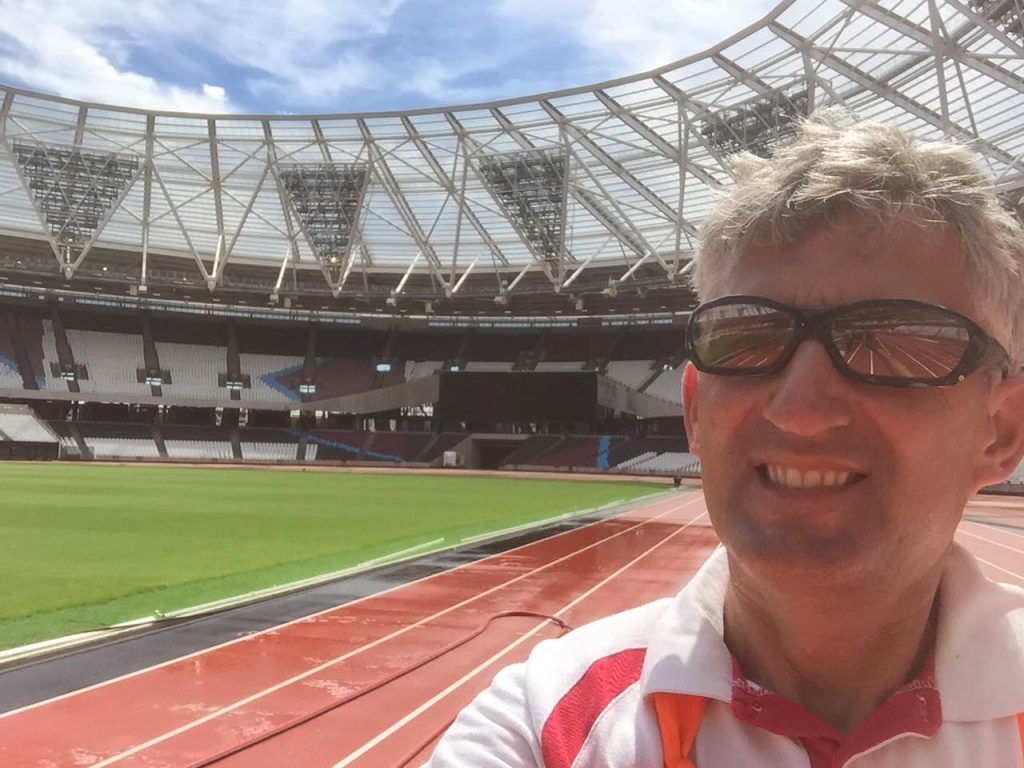 Last week’s surveying and painting of a 4 lane sprint track for a good client of ours in County Durham. 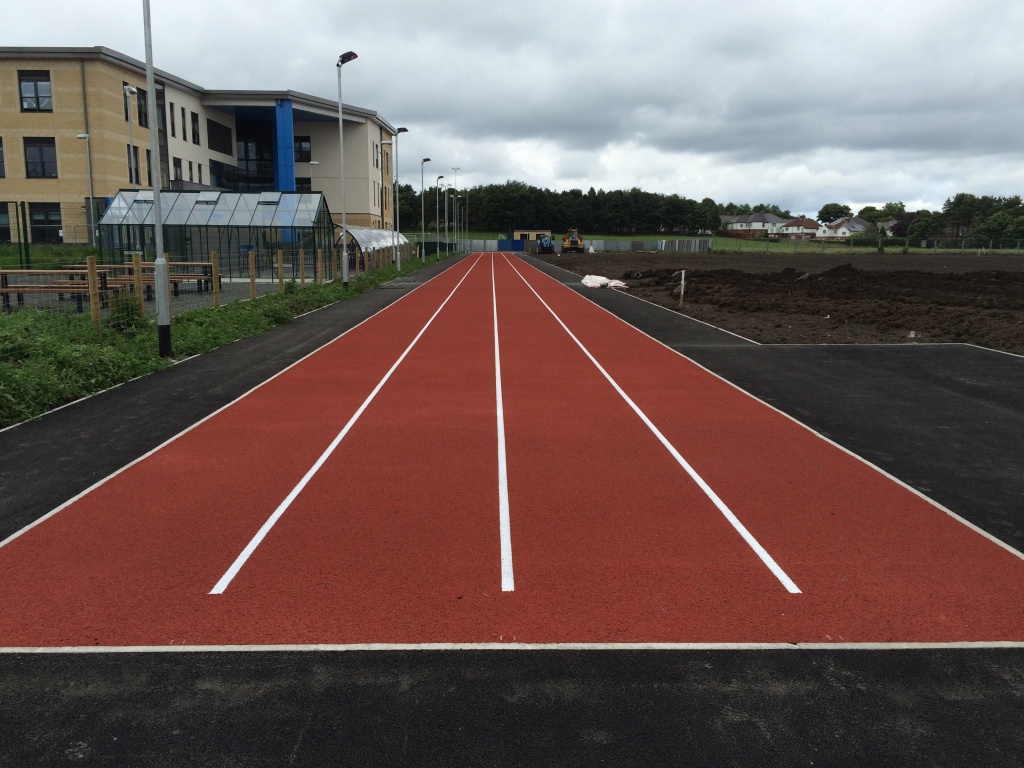 Although the job was small and the sky grey, we are very happy with the finished results.

The Gateshead International Stadium has an 11,750 seater stadium, ideal for spectators at International Athletic events and other sporting events including football.

Here is a mid-clean shot where the team have currently cleaned a lane width at a time, leaving no overlap marks. 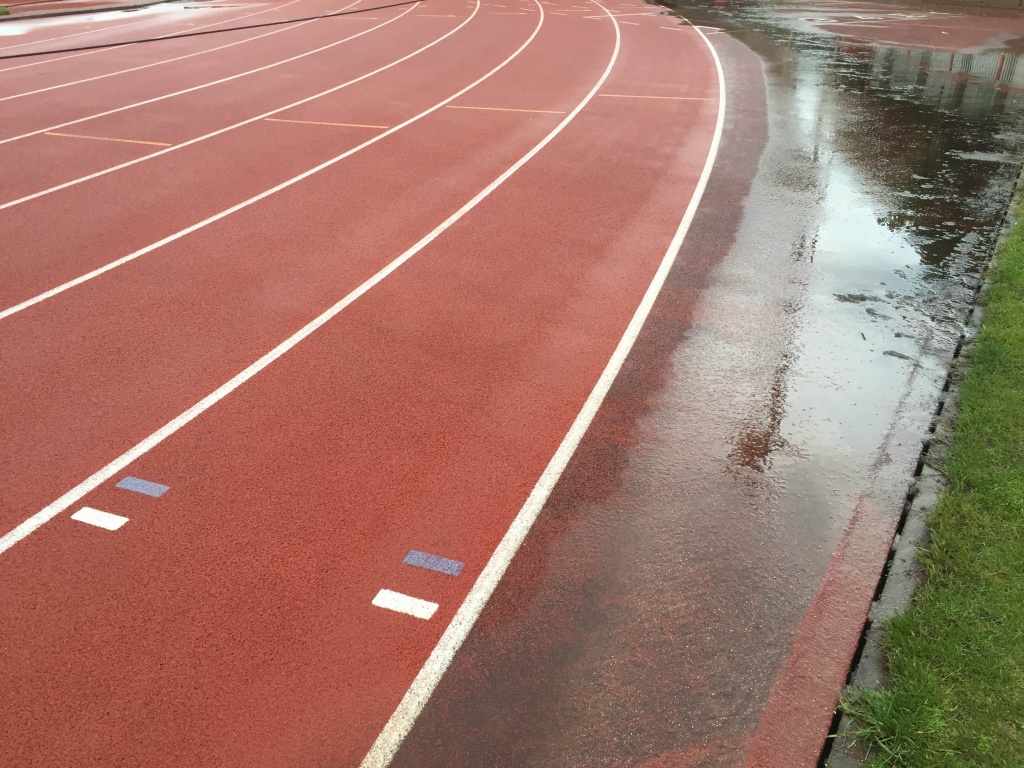 Here is our before and after pictures from the track wash. It’s nice to see how smart the track looks and how nicely a simple track wash can brighten up your track. 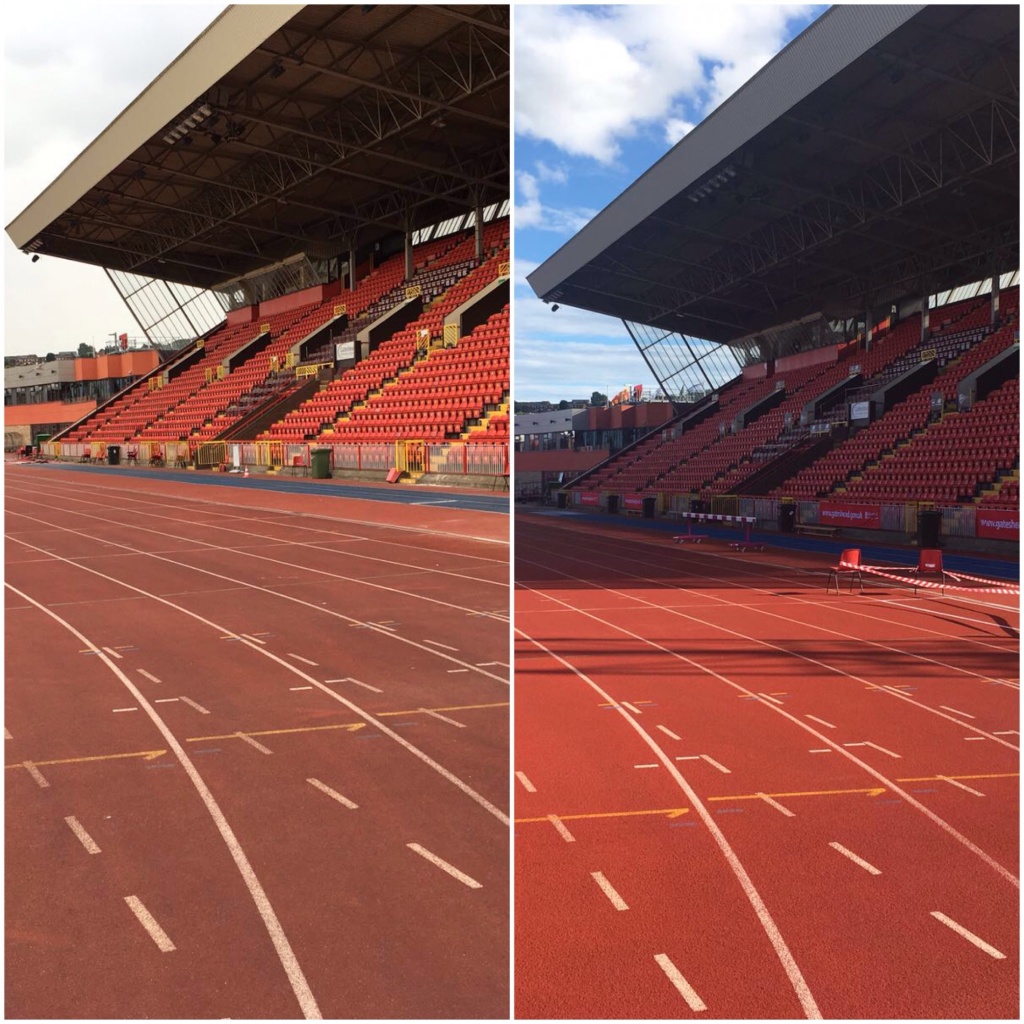 We are really pleased with the results and left Gateshead event ready for the ESAA National Championships on 8th and 9th July 2016.

Over the last few weeks, we’ve been surveying and painting a series of mini indoor tracks. We are pleased to have been asked to paint these various tracks in a number of gyms across the country. So far, we’ve painted these mostly in the north of the UK. The purpose of these tracks is for gym-goers to warm up and cool down on. It gives them a space to stretch their legs between circuits or simply sit on the verge of astroturf in the centre of the track and relax. We think the concept is great and more gyms should have areas like this. Plus they look smart too! 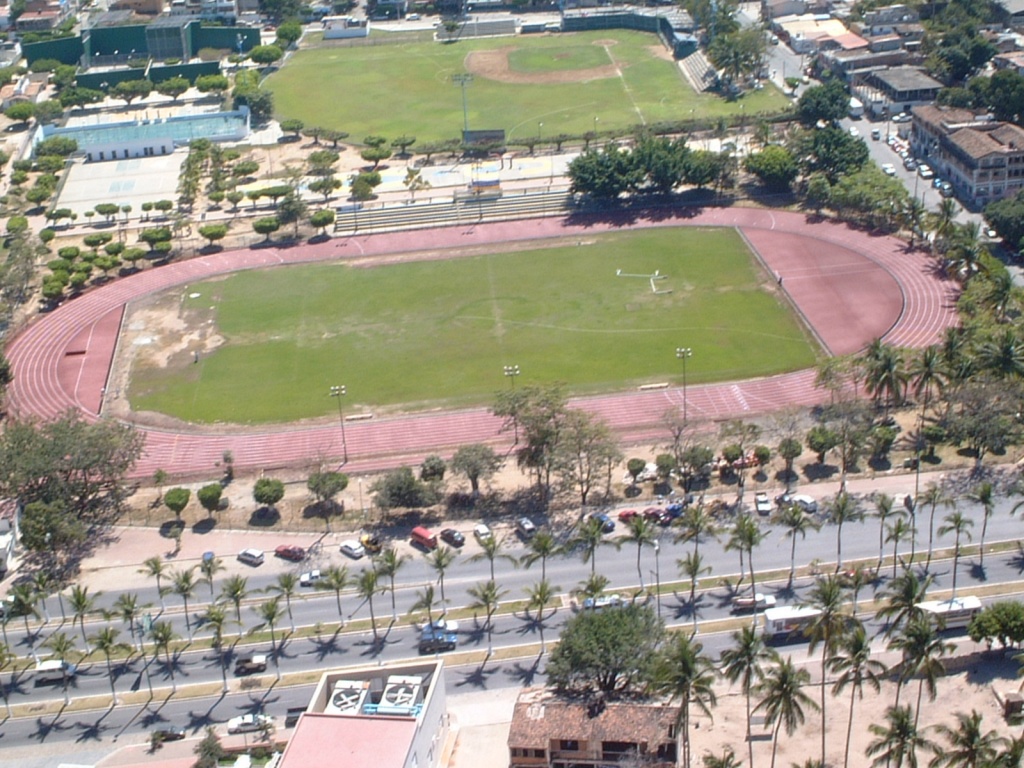